The Interactive Dot matrix printer acts as an artefact created to function as a interface for communication between artists of the past and audiences of the present. The artefact allows the audience to experience the same mystery and curiosity that the artist Katherine Nash had when adapting to computer art.

The creation of this artefact was driven by my research and exploration into the dot matrix printer that the artists used. The mystery and curiosity I felt when trying to find, understand and function the printer, helped me understand that this was similar to what the artists of that time.

This is a set up that turns a printer into a video player, using sensors connected to video files, which generates a dot matrix projected print. 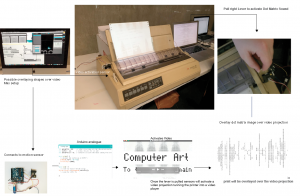 Once a lever is pulled a second projection is displayed that demonstrates distorted clips of how the artists used the printer to create their computer art.

The Speculative design video was originally inspired by the research I conducted into Dot matrix prints in the V&A Archive, in the process of speculating their meaning, stories took shape by using scenarios that developed into a video. The video would be conveyed from artists of the past to the audience using the Artefact (dot matrix printer)

Once a lever is pulled a second projection is displayed that demonstrates distorted clips of how the artists used the printer to create their computer art.

In the process of researching Ideo design methods, I came across Narration, inspiring me to create a diverse sound narrated by three people, whose voice tone would represent the shift from introduction, design process and users creating their own art.

The first recording is played by myself, giving steady voice tone and talks about the past computer art.

The second voice relates to the speculations of how the art was created.

The third relates to inspiration and directing the audience to try creating their own computer art.

These sounds recreate the sounds each print made in the process of creating computer art.

I used contextual surveying to monitor how the audience may interactive engage with the environment around the dot matrix printer, and how they would interact with the technology. We did this my monitoring theory use of space and engage with operating the printer. 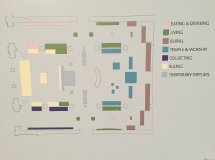 The Hunt for the printer 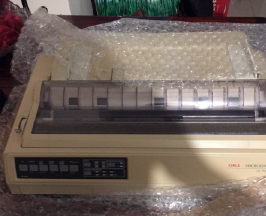 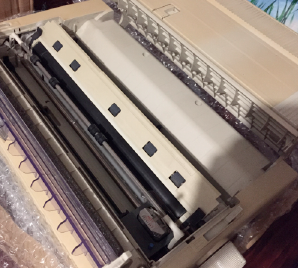 The more we searched, we found that the printer was now seen as an object of great value with an average cost betwean £100- £200, shocking considering that no many people know how to work it.

We found a printer for a Reasonable price of £24 an bidded and won the device, but when I recieved it the mysteries only grew.

It was then that I found that I am fascinated by the mystery such as a button for changing fonts, but the object had too many parts that modern printing does not have. It was like it rejected modern technology 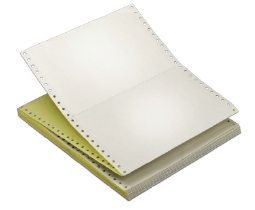 The printer required special dot matrix paper, rejecting the standard computer paper. The paper itself was rare and and expensive, costing an average of £50 , but what was fascinating was tha the paper was contiuesly

The printer used components and like wire that were not compatibe with modern computers, leading us to find usb adapters

These different components were difficult to find and become something of a hunt, Where I learnt what was needed and also got insight into the mind of the designers by understanding the tools they used, connecting with that frustration and relief when the pieces come together

Upon further observation we found that the prints carried the same name of university and computer centre with dates that were very close to each other.

This speculative design research method helped form a connection between these designers that sets the prints as a collection, from this we can speculate that they were artists who followed a similar design approach to Katherine Nash. 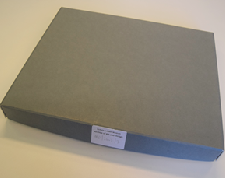 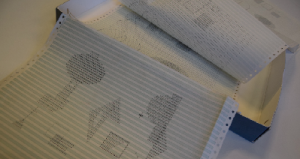 Discover the secrets of the archive

To understand the narative and the link it plays to the Kathrine nash and the technology of the time, we returned to the archive.    Finding that what we had seeked could not be found anywhere else as if it the information predated the modern technology 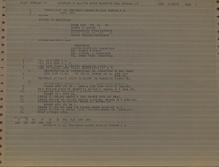 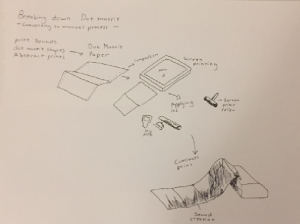 The space oddesy demosntrates in the begining of the intro, we see that in a primitive or natural envrionment, these apes come in contact with an artifact of mystery. it is not clear what it does or how it functions leading them to engage with the object.

I believe that this is similiar to the behaviour brought forth when we as of a younger generation come into contact with technology that from the past that we are put in a position to operate. 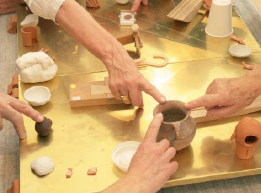 Designer Cecilia created a narrative where the   audience engaged with familiar objects to find their meaning, an idea we found similar to the way the audience would engage with a dot matrix printer that is unfamiliar to find meaning. 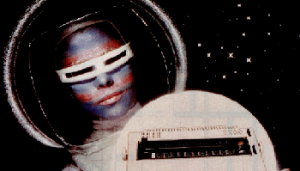 The Printer hold the same level of mystery and curiousity as the time of Katherin Nash. This is because back then technoogy was new and unfamiliar, similiarily in modern time the technology is dated and rarely seen creating a cimiliar form of mystery

We want to create an interactive narrative to the artefacts of Katherine that will allow the audience not only to learn from this disaster but being gauged and create their own style as they engage with Catherine gnashes past. The design approach will use the technology of the time to reconnect the audience with computer art from the distant past.

Processing that recoded sound waves and sent this as an image to the printer. This process however would fail to maintain interaction due to the slow pace of dot matrix print. 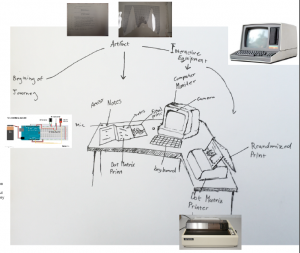 As part of the Diaghilev and the Golden Age of the Ballets Russes exhibition at the V&A, we were invited to collaborate with the Education Department to create an interactive installation. Building on our previous work with Masks, we produced an interactive mask maker that was audio responsive. 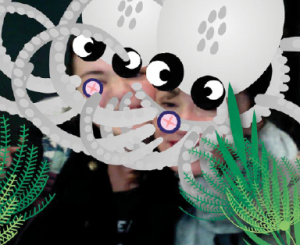 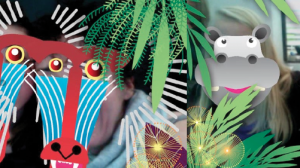 This piece is inspirational because it combines and engaging interaction process with a survey that creates designs based on how certain audiences were invoved with the designThe animal the mask generated could speal to a personality or sound that they prefered relating to that animal.